Click on each session title to view its summary, speakers, Briefing Book, and presentation slides. The Briefing Book for each session is a collection of materials relevant to each panel carefully curated by MIP staff, and which typically includes resources from each speaker represented on the panel.

This is an accordion element with a series of buttons that open and close related content panels.

Leading Under the Microscope

Speakers on this panel represented cities with populations ranging from  30,000 to 300,000 and spoke about crises spanning gun violence to lead poisoning. Throughlines emerged between all of the presentations, specifically around strategies for caring for impacted families and communities, managing national media, and the challenges of conveying leadership while serving as “communicator-in-chief.” They also discussed longer-term responses and decisions on managing the change that needs to happen post-crisis and attracting outside resources to support the community. All spoke to the overwhelming feeling that came when the spotlight hit their community and shared strategies for self and community care, ranging from physical exercise to benefit mental health to proactively creating a process to prepare for incoming open records requests. As panelist Heather Fagen (Orlando, FL) shared, asking yourself “Do I have to make this decision today” was one strategy for helping to manage the overwhelming task list that comes with managing a crisis.

This session highlighted reasons for the dramatic rise in pedestrian deaths across the country, which communities are being most impacted, and how mayors can work to reverse the trend. Speakers described why the United States is one of the most dangerous developed countries in the world to be a pedestrian, including policy and infrastructure decisions prioritizing cars over people, as well as how mayors can work with their state and federal partners to fund the projects that will create safer communities for everyone. Attendees learned about Albuquerque’s efforts to reduce speed and crashes with near-term low cost/high impact safety countermeasures as well as Somerville’s extensive traffic calming strategy that incorporates things like curb extensions, crossing islands, and raised sidewalks to slow traffic and prevent crashes. Interested in learning how to make your community’s streets safer? Be sure to check out The Mayors Institute on Pedestrian Safety (MIPS).

One of the best and most unique things about MIP meetings is the opportunity for mayors and senior staff to engage in intimate and candid dialogue about the unique challenges they face, and Conscious Leadership in Polarized Times provided a space for sharing, healing, growing, and learning about strategies to advance racial equity in their communities. It also sent mayors home with tangible ideas to implement in their communities, for example former Minneapolis Mayor Betsy Hodges’ recommendation to annually ask your department heads, “If you had 10% more money in your budget, and you could only spend it to increase racial equity in the work your department does, what would you do?”

The Innovation Showcase, a beloved staple of our in person convenings, is a lighting round of good ideas where city leaders get 3 minutes to share a good idea, policy, program or practice that they’ve implemented or are working to implement. As our gracious Showcase MC, Mayor Victoria Woodards, noted, “the greatest compliment you can give a good idea is taking it home and making it yours!” This year’s showcase featured mayors from around the country highlighting innovative initiatives in their cities, ranging from efforts to meaningfully engage community to regional climate action, and from empowering young women of color to  year-round solutions for seasonal worker challenges. Check out the Innovation Showcase presenter slides to learn more about these efforts and stay tuned for our next opportunity to see – or participate in – the Showcase!

We are incredibly grateful to our keynote speaker, Shalanda Baker, Director of the Office of Economic Impact and Diversity at the US Department of Energy. Director Baker began her address by calling on her personal experience growing up in Port Arthur, Texas, in the middle of what is known as “cancer alley.” This introduction framed her main point: not only do many Americans face energy insecurity, but that people of color are vastly overrepresented among them. Furthermore, Director Baker highlights the importance of viewing this problem as structural – communities of color are at a disadvantage even when controlling for income and homeownership. Only when there is parity in access to capital and job creation and equity is woven into every aspect of every department and program, can the structural nature of energy disparity be properly addressed. Director Baker stressed that mayors have a unique opportunity to support progress on these structural shifts, for example through leadership on programs like Justice 40. 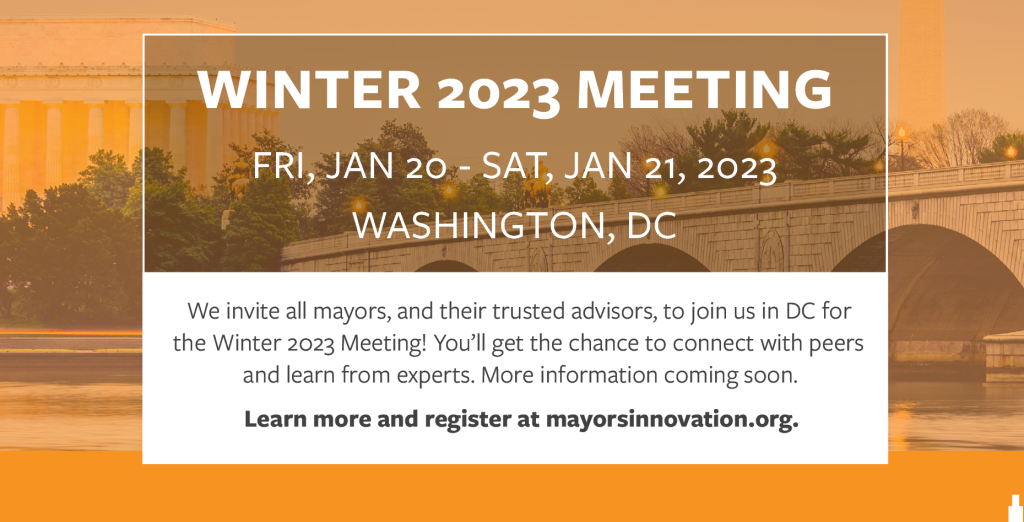 Thank you to the speakers, sponsors, and attendees who made our Winter 2023 meeting a success! Scroll down to see meeting materials, presentation slides from speakers, and more!

Thank you to our generous meeting sponsors!

Thanks to the Mayors Innovation Project for giving me a chance to share our success in creating a public works laborer position to transform hourly positions into good jobs with benefits and career advancement opportunities. #MayorInnovation #BuildingABetterMadison pic.twitter.com/Zz0lICiIzW

It's been a busy three days in Washington DC. where the nations' mayors came together to share ideas and make our voices heard. Always grateful to return home to #ChapelHill with new information and ideas for advancing our goals.#MayorInnovation pic.twitter.com/qfowF3Bk50

Meeting climate goals and building equity in our communities is critical.#MayorInnovation https://t.co/2UTWXejOa7

Great to be gathering w/mayors at @MayorInnovation #MIPWinter2023 meeting. In a room of such abundant leadership, I can’t help but be hopeful and inspired. pic.twitter.com/eEZExrUJBQ

Get all opportunities and updates sent to your inbox.