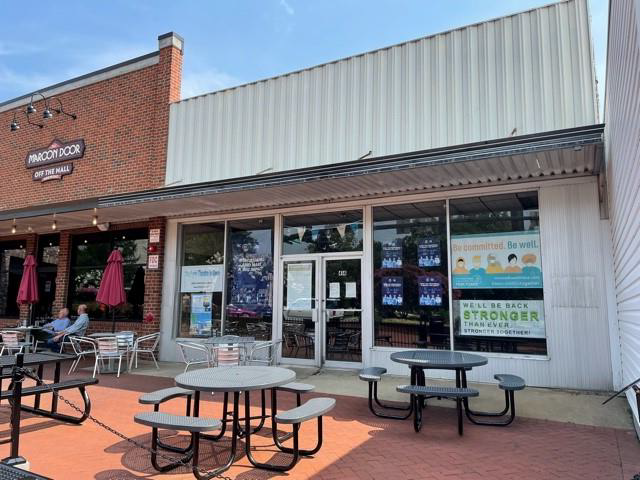 This week, we are featuring one of our member cities. The Town of Blacksburg, VA participated in the Mayors Innovative Design Cohort, a partnership with The American Institute of Architects (AIA) to help mayors build zero-carbon, resilient, healthy, and equitable cities. Read on for our interview with Mayor Leslie Hager-Smith of Blacksburg, VA to hear more about the Mayors Innovative Design Cohort and how Blacksburg is thinking about downtown revitalization and specifically a vacant storefront located at 414 N. Main Street. This interview has been edited for length and clarity.

Where does the project at 414 North Main Street stand as of today?

We are on the precipice of issuing an RFP and the project was advanced considerably by the award from MIP and the AIA. It has been a tremendous help. We went from a kind of vague concept and a need to clean up a toxic, old dry cleaners in 2016 to the happy surprise that we could get design assistance, and with the help of the AIA we’ve gone from a vague need to actually being ready in concept. We have good consensus on the way the space needs to be configured, and now we would like to add our ARPA (American Rescue Plan Act) funds to get the job done. So, I think we can say for sure it’s going to be done by 2026.

For you personally, why does this project excite you, and what do you think it’s going to bring to the Town of Blacksburg?

Personally, I have been in the trenches, working to boost the fortunes of our downtown since 2008, when I was the director of the downtown merchants association. So, like all downtowns across the country, we have suffered. But this is a really good time to see this project come forward. There has been substantial reinvestment in the downtown. There are new restaurants, there’s a new brewery right next door to this location, so I expect this will do an immense amount of good. It will do more than a single retail space could do because what we conceive is that it will be a home for up-and-coming retailers and nonprofits, including the downtown merchants, as well as arts organizations. There will be gallery space at the front of the building, meeting space at the back and some booth locations for retailers who want to trial their idea. So, it will be a retail incubator. And this will provide street activation in a way that another kind of business could not. So, we are very enthusiastic. It checks a lot of boxes. We are grateful and honored to have participated in the program.

I think that’s a really great example of how one individual project, even if it’s privately owned, can be a benefit to the entire community.

This space actually isn’t privately owned. It was previously, but this space is now owned by the Town of Blacksburg. It would have been a choice to sell that space to a business, but as we weighed all the pros and cons and as we worked with AIA to conceive of how it could lay out and who could benefit, it actually became clearer that it will do the community more good to be owned by the community and used by many partners.

Can you talk a little bit more about how partnering with AIA has helped move this project forward?

It seemed to have come at exactly the right moment. In 2019, we knew that we needed to remediate the dry cleaner chemicals. That has involved vapor extraction because there were chemicals accumulated in the surface. That took months of just allowing the building to sit there and during that time, while working with the Virginia Department of Environmental Quality, we’re cogitating, and we’re thinking: what would be the highest and best use? Well, then MIP and AIA came along, and it just turned out to be perfect timing for us because as the cleanup process was resolving we needed to crystalize those concepts, to explore with professionals how we could actually use that space. What would it look like? How could you secure individual display spaces? Where would the meeting space best be placed? Could there be public restrooms? So, all those things we explored with members of the AIA. It was very helpful.

And what lessons learned would you offer to other mayors who are interested in projects like this? And how would you say they can be most successful and provide effective leadership around this type of issue?

Well, I think there needs to be a vulnerability. We didn’t acquire this building altogether by choice, but we knew that its location was primo and that with some creativity and some hard work that we could turn things around for the building and by extension for the community. So, it is tempting to hunker down and be protective when you’re filling a public role as our town staff does and as mayors and other elected officials do, but really what this situation required was to be vulnerable, to attempt to be creative, to take it in baby steps. Some of the things we did were an act of faith, they were a leap of faith, but I think it’s going to work out very nicely. And we could not have done it in isolation. We couldn’t have made the funding reach. We wouldn’t have been in a place for ARPA funds except that this design process had taken place through the MIP grant. So, it’s been baby steps and a little tentative at times.

And what are the next steps for the project?

We will be putting in a call for proposals because now we’re in a place where we can do it. And of the 13.3 million dollars in ARPA funds that the town is receiving we will put 1.75 million into it. And that should get us very far – getting that space reactivated and back online. It will be home for something called the Community Arts and Information Office that’s associated with our downtown art deco theater, a nonprofit. It will also make an office for Downtown Blacksburg Inc. It will be a display space for artists. At the front it has big old-fashioned glass windows, and people will be able to enjoy the artwork there. There will be a meeting space at the back, and there will also be spaces where retailers, people from the community or even beyond the community- we want this to be a regional benefit- so people from other nearby towns and within our county will be able to make proposals and trial their retail ideas.

One last question, you’re active in mayor spaces around the country, why do you think it is helpful for mayors to be involved in peer networks like the Mayors Innovation Project?

Particularly in the last few years it has been really easy to feel isolated, attacked, misunderstood. It’s hard work serving the public and I’m honored to do it, but I get a real boost from people who are in the trenches with me. It’s very helpful. You get good ideas. You get moral support. You get an emotional bounce from being with other people who are doing the same work you’re doing.

Mayor Hager-Smith champions quality of life for all residents, focusing on projects that enhance place attachment and create community. You can learn more about the Mayors Innovative Design Cohort and the other participating cities here.

Highlights from the 2022 Summer Meeting

Cities are leading in efforts to advance workers’ rights