Conducted in fall 2021, the survey found that 94.5 percent of all mayors reported psychological violence at least once, with 24.2 percent reporting at least one threat, and 15.8 percent suffering physical violence.

View the full brief here. Among the most concerning findings:

Women mayors of color report the highest rates of harassment and threats.

Furthermore, WoC mayors reported the highest levels of violence critical of their race followed by MoC mayors. And both groups experienced significantly higher rates than NHWM mayors:  17.8 percent of WoC mayors and 18.1 percent of MoC mayors were criticized based on their race monthly.

“The findings highlight an important issue for representation:  will the higher rates of violence against women and women of color mayors result in disproportional increases in decisions to leave public service and to avoid running in the first place?” asked Sue Thomas, researcher and brief co-author, “if so, the effects for diverse representation are serious. Since women and women of color are already under-represented in public office, including mayoral office, the result will further affect our capacity to bring diverse voices to the policy table.”

“As a national network for mayors, this is very concerning – both because it’s a threat to mayors’ personal safety and because of the potential to increase the already striking gender and racial parity gap present among executive elected officials,” stated Katya Spear, Managing Director, Mayors Innovation Project. “Mayors should not have to weigh their decision to run for office—or stay in office—based on these kinds of abhorrent threats.”

Sexualized and gendered violence is more common for women mayors.

“Intimidation, threats, harassment via email, phone and (primarily) social media are constant and wearing. Posts regarding my home security, deliveries to my home, and repairs to my home have been posted online. Posts including sexual slurs occur with some regularity. My cell number and photos of my husband have been published. Posts of mine have been shared with…hate groups.”

65.2 percent of NHWW mayors experienced at least one type of psychological violence monthly, compared to 63.2 percent for MoC mayors, 57.1 percent for WoC mayors and 55.4 percent for NWWM mayors.

These findings have deeply significant impacts on local democracy.

70 percent of mayors knew someone who chose not to run for office due to these issues, and 32 percent thought about leaving office themselves.

“After serving for [10+] years as a Councilmember, then Mayor for a year, uncivil action was the number 1 reason I chose not to seek re-election. I just don’t need the stress.”

“Local officials, including mayors, election administrators, and school board members are experiencing political violence,” stated Heidi Gerbracht, Founder of Equity Agenda, “They are also the heart of American democracy, serving from within their communities, which also puts them in harm’s way. We have to address local political violence, so that it doesn’t deter women and people of color from running for these roles.”

“CAWP Research Grants seek to identify obstacles to greater political access for women,” said CAWP Director Debbie Walsh, “and no obstacle is more chilling than fears of physical and psychological violence. This work is an invaluable addition to the body of knowledge surrounding women candidates and officeholders, and we are proud to support it.”

The survey polled 3,151 mayors in fall 2021, with 971 responding which resulted in a 30.8 percent response rate. The survey was conducted by academics at Oklahoma State University, with support from the Mayors Innovation Project and Equity Agenda. View a more detailed analysis here.

This research is made possible, in part, through a CAWP Research Grant from the Center for American Women and Politics at Rutgers University. CAWP Research Grants support scholarship that investigates and illuminates barriers and opportunities to increasing women’s political power in the United States.

*Political violence includes a range of both physical, psychological, gendered and/or sexual violence, and race-based violence. 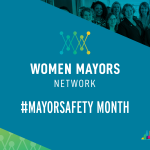 Join us: May is for Mayor Safety