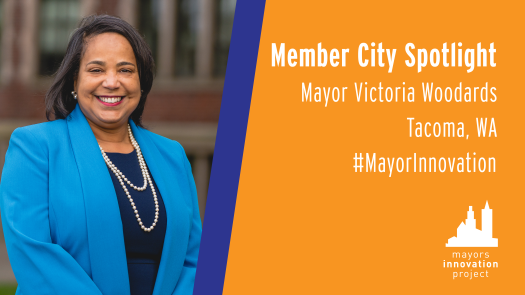 In honor of the Summer 2020 Meeting to be held in beautiful Tacoma, WA August 20 – 22, we interviewed Mayor Victoria Woodards for our February Member City Spotlight.

Read on to find out what makes Tacoma great, why mayors should attend the Summer Meeting, and what wisdom she’s learned along the way during her tenure.

Why should mayors come to Tacoma for the Summer 2020 Meeting?

Tacoma is anything but ordinary. With both charming neighborhoods and big city amenities, it’s a city that has always marched to the beat of its own drum.

Birthplace of world renowned glass artist Dale Chihuly, you’ll brush elbows with a vibrant, creative community of emerging writers, artists, makers and musicians. Passionate entrepreneurs and small business owners have shaped Tacoma’s commercial landscape for decades, creating a number of business districts each with their own character, unique shops, and amenities.  Our City leaders express this same spirit of innovation and resourcefulness, and they are excited to engage with you on best practices in areas of shared interest.

Located on the Puget Sound and near Mount Rainier, you’ll also find great places to bike, run, hike, and explore. Alongside our beautiful parks, we have a growing food scene that’s made national press, the iconic Tacoma Dome that hosts some of the largest names in the entertainment industry, and a number of world-renowned museums.

The third largest city in the state of Washington, Tacoma is a diverse, progressive international gateway to the Pacific Rim.

We are a city of epic natural beauty and resources. The water that is Puget Sound is our region’s identity and our economy.  Commencement Bay, the shore of Tacoma, is a natural deep-water harbor that supports more than 29,000 jobs and is the fourth-largest container gateway in North America.

Puget Sound is also the largest estuary (by volume) in the United States. It is a breathtaking, complex ecosystem of mountains, rivers, forests, and wetlands that for thousands of years has fed salmon, orca and the indigenous people.

Today, we are engaged in a planning effort of historic proportions – with partners at the Port of Tacoma, Puyallup Tribe, Pierce County, and the neighboring City of Fife –  to ensure a well-utilized future for the Tideflats area that considers the major role this area plays in both our economy and our environment.

As Mayor, what are you particularly proud that the City of Tacoma has accomplished over the past few years?

I’m proud of what we have done, and are doing, to address homelessness and attainable housing. We haven’t solved it, but we have committed to actionable items in the Affordable Housing Action Strategy (AHAS) and a regional coalition of local governments being formalized now under the name “South Sound Housing Affordability Partners (SSHAP)”.

The AHAS will provide and preserve over 10,000 homes over 10 years in Tacoma where 40% of households are cost-burdened by their housing. SSHAP is a bipartisan coalition of elected leaders from across our county who have committed to an enduring of coalition to assist each other in making needed progress on the crisis while honoring the unique circumstances and needs of each jurisdiction.

What were the main barriers to getting this work started or accomplished?

Funding is always an issue, as well as having the resources to support the work you need to do. This work has also been dependent on community will. Getting buy-in and being able to incorporate all of the needs and concerns that interlace the issue of attainable housing is a huge challenge.

Every community, every neighborhood, and every city has different needs.  And especially as we work together across the region on SSHAP, we recognize that different jurisdictions have different definitions of affordability. Additionally, the density that may be appropriate in one community is not realistic in another.  How do you keep everybody engaged at the table with so many different interests and goals? So far, the network leadership model that we have seen successfully modeled by similar local government coalitions on housing has helped us to balance these tensions and needs.

How did you overcome these barriers?

Transparency and inclusion have been key to moving through the barriers. When I took office as Mayor, Tacoma had a reputation – as the largest city in Pierce County – of coming to the table to direct others and not to listen. I’ve been deliberate and intentional with words, both spoken and written, and how I’ve structured meetings; letting Mayors from all across the region know that they have a voice at the table in the formation of SSHAP and ensuring that providers in the community know the City’s commitment to the action items in the AHAS. I’ve had to be brave to take risks and be ready to work through the challenges that arise. And particularly while we worked to restore trust in Tacoma’s willingness to work as a collaborator across the region, I’ve had to trust that the process will work itself out.

What learning lessons would you offer to other mayors on successful and effective leadership around these issues?