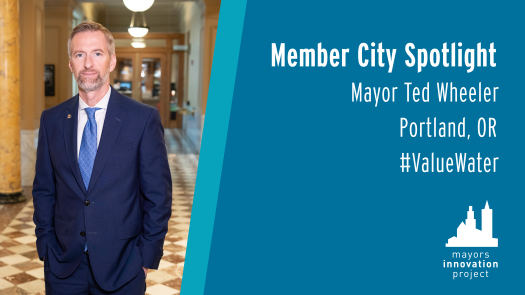 Imagine a Day without Water

On Imagine a Day without Water – a day of education and advocacy about the value of water – mayors are rising to the challenge of addressing the critical need to update our water infrastructure systems. We are excited to launch our new series: “Member City Spotlight.” This series features Mayors Innovation Project member mayors leading the way on equity, sustainability, and democracy. In honor of this day, we are excited to feature Mayor Ted Wheeler of Portland, OR discussing how his city is addressing a variety of water infrastructure needs.

An Interview with Mayor Ted Wheeler, Portland, OR

Can you provide an overview of how you’re addressing the critical need to update your water systems?

Portland, Oregon is surrounded by spectacular and diverse natural beauty, but the joys of living in this Pacific Wonderland come with risks: floods, wildfires, severe storms and earthquakes to name a few. Of these risks, it’s earthquakes that can rattle city planners the most, especially when it comes to ensuring the delivery of clean water to nearly a million people in our region. The Portland region has a 16 to 22 percent probability of experiencing a major earthquake in the next 50 years.

Our Portland Water Bureau has an aggressive plan to strengthen the backbone of our water system, prioritizing the replacement of larger distribution pipes, fortifying existing infrastructure and building new earthquake-resistant reservoirs. Included in this work are two innovative projects to improve our ability to get water to the west side of the city after an earthquake: a new seismically reinforced reservoir at Washington Park (a park on the city’s west side), and an earthquake-resilient water pipe deep under the Willamette River (our city’s east-west divide). Without these key projects, more than 360,000 people would likely be without water service for weeks or even months after a major earthquake.